My car is a 1986 Porsche 911 Turbo SE. It was delivered new to its first owner in Saudi Arabia by Samaco Bin Laden, the official Porsche Centre in Jeddah. Whilst you could never call something like this an accidental purchase, I didn't go looking for a 911 slantnose, and in fact it was only due to me viewing another 911 at a dealership that I noticed this car in the corner.

The 911 Turbo SE and Turbo S (its US stablemate) were produced to order with 935-style wings and air vents, and a host of Special Wishes or 'Sonderwunsch Programm' options. My car is different from most other flachbau versions in that it did not have the option of boxed sill extensions (rockers) fitted that mimic the aero package of a 935. In addition, the front wing vent option had been deleted/not specified. To my eye, the lines worked better and were less aggressive than other variants that I had previously seen. I have now owned this car over 13 years - longer than any other.

This particular 911 Flachbau is one of just 204 2nd generation factory Slantnose cars produced by Porsche between 1983 and 1987. The car was completely custom-built by the Special Wishes Department in Werks 1.

Externally, aside from its distinctive looks, the most notable feature is that it was painted in code L999 'colour to sample', Ferrari Rosso Corsa red. On the inside, it has perforated leather seats in special order 'code 99' magnolia, perforated leather headlining (rather than the usual vinyl) and a rare walnut dash. In keeping with the Porsche Exclusive ethos, it has one of the several variations of Slantnose centre console, passport/cassette tape storage bins with magnetic catches that drop down from under the dash, and the obligatory gold-plated gear knob. The steering wheel is also from the Special Wishes catalogue with a central brass Porsche logo on the boss. 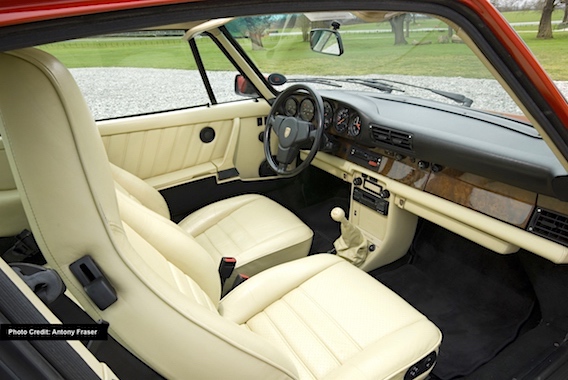 Like many 911 Flachbau's produced for non-US markets, the car has engine modifications that raise it's power output to over 330 BHP (dyno tested at 335bhp).

As with any 930 of this vintage, it is very old school in its power delivery, with turbo lag evident prior to boost coming in around 3000 revs. You never tire of the on-boost experience, though it remains a car that requires respect, particularly in the wet.

Prior to me purchasing the car, it had been used daily in Colchester and London by a lady driver who had had the car imported from its second owner in Saudi. Consequently it needed some restoration work to bring it up to the condition it is in today.

The car is relatively well known having been featured in various UK publications, including Classic Cars Magazine and in 911 & PorscheWorld Magazine. Initially I was unaware of how rare it was. During my earlier years of ownership I was struck by how little was actually known and published about them outside of the factory. With the benefit of over 13 years of research, and contributions from several other owners, it seems only appropriate to try and document and share this experience, which is how this site came about.