Evolution of the 911 Flachbau 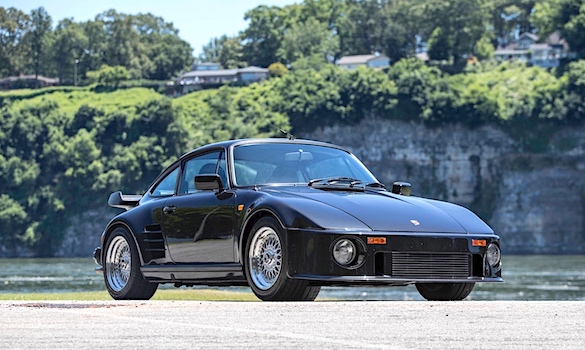 A small handful of prototypes pre-date the official 'Special Wishes' production records that started in 1982, including a car built in 1980 for German businessman and Porsche customer, Gerhard Siegfried Amann. This car started life in silver with the 'Generation 1' hammerhead style front bumper and lamp clusters. It was built at great expense as the very first factory slantnose, and brought back to the factory in 1985 following the launch of the Special Wishes Program for updates, Special Wishes enhancements, a repaint in black and a 330bhp engine upgrade kit. At some point, the car was modified with a DP Motorsport 935-style front valance, replacing the original bumper mounted lamp clusters.

In recognition of it being the first of many, Porsche placed a brass plaque on the glovebox lid with the Porsche crest and a code specific to Mr Amann ('G.S.A-0/13/31') engraved on it.

The original style of factory flachbau conversion had no pop-up lamps at the front. Instead these cars had smooth, flat-faced wings leading to a fibreglass front valance assembly containing twin lamps either side below the bumper. This 'hammerhead' styling was not to everyone's taste, and fell foul of type approval regulations in certain markets. Only 58 of these cars were made before the more common pop-up lamp styling appeared during 1983. The first generation cars were produced with a mix of Special Wishes Program options, often with the sill or rocker covers, many without any rear air-intake vents. All cars were produced in the Restoration and Repair Department in the Werks 1 building.

The second generation of slantnose cars continued to be products of the Sonderwunsch Programm, available only by special order. The styling was updated with a more elegant front air dam containing driving lights and a centrally mounted oil-cooler. Headlamps were moved to pop-up units in the front wings, with optional air-intake vents above the pop-ups lamps, imitating the 935 race cars. Some RoW markets required clear/white front side lamp lenses in the bumper. These cars have Hella 'square' lamp units and bumper-rubber trim inserts that are specific to those cars with the square side lamps. Most, though not all, second generation cars left the factory with boxed sill covers, rear air-intake vents and a custom interior. Some were also specified with the 330bhp power kit. The mix of options specified was varied and truly 'special wishes'. Production numbers are debated though best estimates suggest that 204 second generation cars were produced in the Restoration and Repair Department in Werks 1.

The final series of 930 slantnose was produced in greater volume with some 630 cars reaching the US market (M505) and 56 cars produced for Rest of World (M506) markets, of which 50 reached the UK. By this stage, the Porsche 911 Turbo S (M505) and 911 Turbo SE (M506) were available on a dealer showroom pricelist. The M505 models were also the first slantnose version cars to be officially imported to the US. The third generation cars were manufactured alongside standard 930 models on the main production line in Zuffenhausen. All cars were produced with pressed front wings/fenders that included the air-intake ducts above the pop-up lamps. The cars were then transferred to the Restoration and Repair Department in Werks 1 for finishing.

M505 models had the standard 930 front valance and standard 930 3.3 Turbo motor with catalytic converter. The low mounted centrally positioned oil cooler of the M506 models was not permitted in certain US states, so the oil cooler was instead mounted in the right rear wheel arch behind the air-intake vent. Some of the M505 cars were produced by Alan Johnson Racing from factory-supplied kits in the US. Records show delivery of 609 US specification cars from Stuttgart, with the other 21 cars presumably built from the factory kits.

The M506 models all had the front mounted oil cooler and deeper air dam. Most of these cars were delivered with the 930/66 Turbo S kit offering 330bhp. The exception were those vehicles delivered to RoW markets requiring a catalytic converter. UK market cars all had the 330bhp kit and interiors with Special Wishes centre consoles. Some RoW cars have the Hella front side lamps as required in particular markets.

Production numbers are very difficult to verify as the factory did not formally publish the numbers. However the above figures are derived from original factory letters and research from notable contacts in the Porsche world.