Signs of damp carpets / floor pan rust could be caused by a leaking sunroof / blocked sunroof drains or by perished Targa / Cabriolet roof seals (if you are inspecting one of the rare M505/M506 Turbo Targa or Turbo Cabriolet models). The slantnose was never produced by the factory as a Targa or Cabriolet prior to 1987.

Cabriolet rear windows often require replacement, though those can be unzipped easily and a new one fitted as a replacement.

Most factory slantnose models were specified with one of three main central console designs that offered a range of custom extra equipment. Missing equipment should be noted accordingly. Some of the pre-M505/M506 Special Wishes cars and a high proportion of the later M505 cars just had the standard 930 floor console. Factory slantnose models also usually have one of several steering wheel designs; the standard Porsche wheel with one of three types of brass Porsche badge to the right side of the horn push (M505 cars), or a three-spoke Porsche wheel with central brass Porsche logo insert to boss (Special Wishes), an Italvolanti Type F / Ati wheel with three thin spokes each with horn buttons and a custom Porsche central padded boss (M506 and Special Wishes), and in rare examples, other custom-trimmed wheels from the Special Wishes catalogue.

Inspect the interior for wear to seating, and rips to headlining (leather headliners were an option and can tear with age). Verify that the space saver spare wheel, wheel jack, compressor, toolkit and towing eye are present. Make sure that the fibreglass trim mouldings that cover the front trunk/load space oil pipes (excludes M505) and headlamp mechanisms are intact and present. Check that the heater controls work. The flaps, motors and thermostat all can play up, and apply the usual electric window, mirror and sunroof checks.

Note that 911 Turbo S / Turbo SE side lights on the front bumper can be different from standard 930/911 models. Factory cars used the standard loom, modified for those lamp units. Verify that side, main and fog lamps operate correctly. Genuine factory slantnose models have a single central headlamp motor (from a 928). Cars with twin motors, are after market builds and therefore should be evaluated with due consideration. 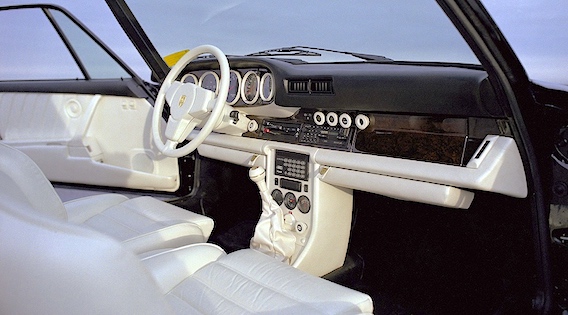 This buyers guide has been split into the main topic areas as follows:

Further information can be found on the Flachbau Forensics page offering a guide to authenticity (how to spot a fake flachbau).